Molecular pathogenesis of multiple myeloma and its premalignant precursor

Molecular pathogenesis of multiple myeloma and its premalignant precursor

Multiple myeloma is a monoclonal tumor of plasma cells, and its development is preceded by a premalignant tumor with which it shares genetic abnormalities, including universal dysregulation of the cyclin D/retinoblastoma (cyclin D/RB) pathway. A complex interaction with the BM microenvironment, characterized by activation of osteoclasts and suppression of osteoblasts, leads to lytic bone disease. Intratumor genetic heterogeneity, which occurs in addition to intertumor heterogeneity, contributes to the rapid emergence of drug resistance in high-risk disease. Despite recent therapeutic advances, which have doubled the median survival time, myeloma continues to be a mostly incurable disease. Here we review the current understanding of myeloma pathogenesis and insight into new therapeutic strategies provided by animal models and genetic screens.

Interactions of MM tumor cells with the BM microenvironment. 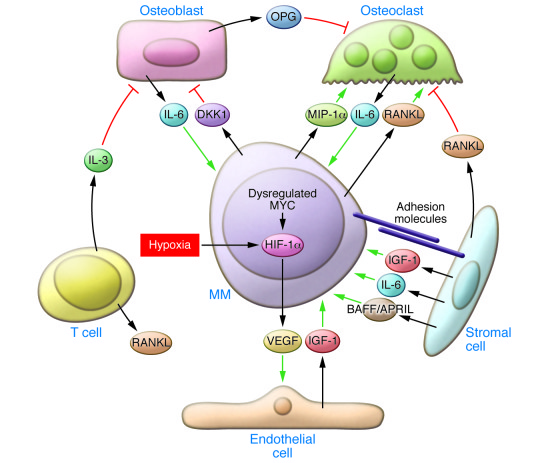 Five kinds of cells in the BM microenvironment are depicted, as well as a few of the complex interactions among these cells and MM cells. Some of the critical survival and growth factors, such as IL-6, are made by more than one kind of BM cell. External stimuli, such as hypoxia and internal signals resulting from dysregulated MYC, stimulate HIF-1α and VEGF secretion, which in turn stimulate endothelial cells to secrete IGF-1. The hallmark uncoupling of bone remodeling is partially explained by an increase in osteoclast activity (mediated by RANKL/RANK interactions, decreased osteoprotegerin (OPG), and increased MIP-1α) and a decrease in osteoblast activity (mediated by DKK1 and IL-3). The resultant increase in osteoclast activity stimulates the survival and growth of MM cells, at least partially by increased IL-6. Potential therapeutic agents that directly inhibit some of these interactions include bisphosphonates (which inhibit osteoclast function), anti-RANKL antibody, anti-DKK1 antibody, and exogenous OPG.