Development of the mammalian lymphatic vasculature

Development of the mammalian lymphatic vasculature

Schematic representation of the development of the mammalian lymphatic vasculature. 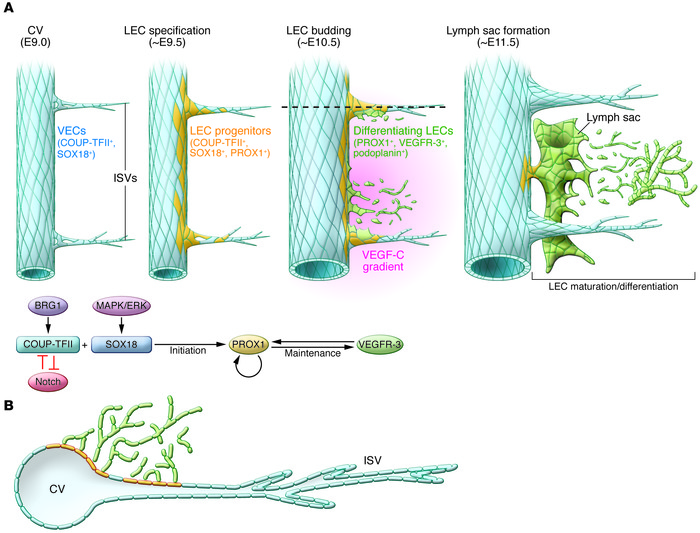 () Sagittal view of the key temporal events that take place along the CV from E9.0 to E11.5 in the mouse embryo. The CV is the main source of LECs. Initially, among others, blood ECs in the CV and ISVs express the transcription factors COUP-TFII and SOX18. A few hours later (E9.5), the activity of SOX18 and COUP-TFII induces PROX1 expression in a subpopulation of venous ECs. The initiation of PROX1 expression indicates that LEC specification has started, and venous PROX1-expressing ECs are considered LEC progenitors. At around E10.5, most of those progenitors start to bud from the CV and ISVs. This process requires the graded expression of VEGF-C in the surrounding mesenchyme. Mediated by PROX1, budding LECs maintain the expression of VEGFR-3 and begin expressing PDPN once outside of the CV. The combined expression of these genes indicates that lymphatic differentiation is progressing. As LECs bud off in an interconnected manner, they assemble together, and at approximately E11.5 they start to form different lymph sacs. Following LEC proliferation and sprouting, the majority of the lymphatic network arises from these sacs. () Transverse representation of the LEC budding process. At around E10.5, PROX1+/PDPN+/VEGFR-3+-differentiating LECs bud from the CV and ISVs. The budding LECs migrate as an interconnected group of cells dorsally and longitudinally into the surrounding mesenchyme in the anterior region of the embryo.